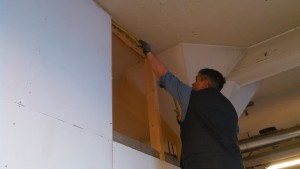 Today was a good day to get visible things done as previous days were spent on preparation and other supporting functions. We were able to build the wall to keep the saw dust on the wood side and out of the reach of kitchen or other cleantech. The dust still at the moment does have a way but when we build a door and some roof it will get better. 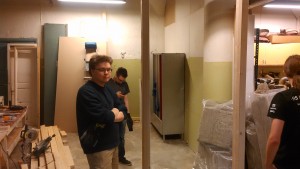 This is perhaps the phase where the construction will continue eagerly on close to every day as it is in a phase where it is not far from being sort of complete or ready. Next thing is to figure out what to do with the floor.

The ceiling and rest of the walls were also planned and actually the latest design is to have a wall straight up from the previously known as clothing room and to not extend the ceiling. As there is not that much advantages in doing so it is then pretty useless idea. Now it is then challenge on dealing with all the pipes through the wall but that should be easier than building a roof in thin air.