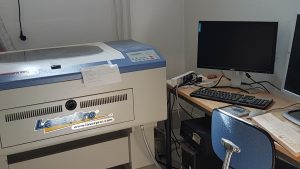 The laser cutter  is a GCC LaserPro Mercury I equipped with 25W RF stimulated CO2 laser. The working area is 635mm × 458mm. The laser is capable of engraving and cutting paper, cardboard, leather, wood, plywood (6mm) and acrylic (10mm). Also some other soft materials can be used.

The maximum engraving speed is 1066 mm/sec. When engraving an A4 size square with 250dpi at full speed, it takes  about 18 minutes to complete

Do not look at the invisible laser beam!

The Mercury acts as a regular printer on the Windows XP (32bit) computer. The settings of laser are controlled via different pen colors in the printer driver.

Laser is able to engrave pretty much any bitmap you can open on the computer. Partially transparent PNGs cause crashing, hence it is strongly recommended to change transparent parts to white.

In order to cut you need to have a vector graphic with thinnest lines. Too thick of a line is considered as engraving job. When cutting the speeds are extremely low, around 1% mark and power is full 100%.