Ikea-hack and trouble shooting an amp 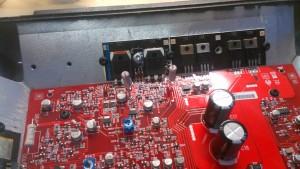 After the exhausting but pretty straight forward meeting there was still time and energy to hack on other things. The other things this time consisted of examination of ice cube makers. First the big one and then the small one. Next time perhaps some more work on those.

Some other things did also get done. As we had an experiences audio guy in the house we used the opportunity and piled up some amplifiers to sort out. One is supposed to be in pretty much perfect working order and the other one was then opened as it was entering into safe mode right away. Pretty soon actually a problem was figured out but as we had no spare parts it is now sitting on the shelf again. 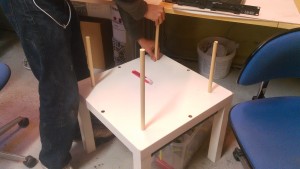 Next up was then the IKEA-hack. As last time the lack-rack was utilized now it was time to move on and hack the lack even more. The prototype of the 3d-scanner is slowly but steadily building up as you can see. You may also note that the 3d-scanner doubles as a lack-rack.

Earlier in the evening we also had a visitor with whom we did not have too much time to chat about as the upcoming meeting was still somehow in the thoughts. But maybe he will visit us again as the place is now known.