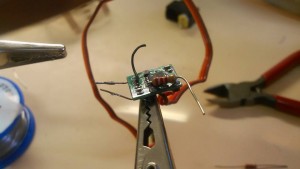 This Wednesday it was time to continue on the 3d-scanner project and as that project has been ongoing for a bit too long it was shortly put aside and the Robot Challenge of Hackerspace Summit Finland 2016 was taken into consideration. As the HSF15 robot was not a success we figured we’d do something different. As the rules do not require the usage of the not-so-good-yellow-gearmotors we went for servos in this approach, for now.

First task was to modify a standard RC-hobby servo for continuous rotation as those will be the propulsion for the robot. We did not have those tiny SMD-resistors as stated in the howto but we were able to squeeze into the tiny servo housing two traditional resistors. We have no idea on how we did it but the lid is back on and screws tight.

A quick testdrive on the servos based on code by Warrior and zoomkat from forum.adruino.cc. 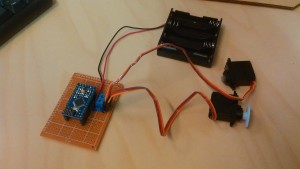 Next the focus is more on the frame, wheels, control and autonomous operation.