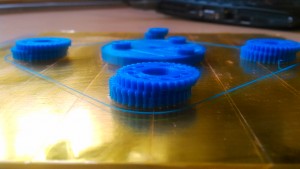 The old belts on the mendel90 3d-printer were a bit stiff and that was considered to have an impact on the random skipping behaviour of the printer. As seen in the photo of small gears. It was possible to reproduce part of the problem by hand as when moving x or y axis by hand the belt tried every now and then climb on top of the teeth in pulley. The replacement GT2 belts had been around from Christmas but as it needed some parts to be reprinted to fit the different belts it was not that active.

Some weeks ago there was a bigger print job that consumed 0.5kg of plastic in few larger parts. Two-thirds into one large part the printed had decided to skip some steps and the rest of the job was a bit off. This was enough for the upgrade process to begin.

After the update the z-height needs to be once again calibrated but the speeds were pumped up already as previously the speeds had been taken down to reduce the risk of skipping.

Why go for GT2? Actually no reason but those just were easily available compared to the older belt type and the GT2 should also be more flexible.

Hopefully this will help in the problem with skipping. We will see. 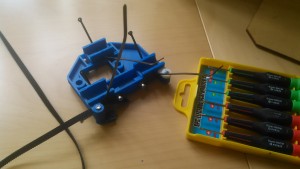 The parts where the belt is fixed includes the x-carriage. The new x-carriage in nice blue colour. 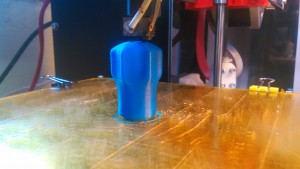