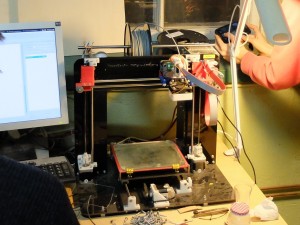 The printer is a mendel90 from a kit from nophead. It is working nice and easy but the frame is somewhat flexible. So try not to move the printer as the base might bend and cause the bed to be unlevel. The printer is equipped with Melzi electronics and Marlin firmware. In the printer there is also Octoprint running on the adjacent raspberry pi. Octoprint can be reached at http://mendel90

The known settings at the moment are

There are no limit switches in the printer as there usually are not. Instead there are home switches. The printer needs to be homed before any movements for the printer to “calibrate” itself and thus prevent hitting walls. This is done automatically in the sliced gcode with default settings. One pain is the z-calibration as the home switch is all the way up and the Z=0 level is at the bed height. The home position is set in firmware and thus not really easy (almost “impossible) to adjust. There should not be need to adjust the Z but if the hot end is removed or other similar maintenance done it might affect the Z.

The firmare is somewhat standard as per nophead except the 0,0 is not bed center but in the corner.

Cura with proper settings for slicing is available on tunkki5, the “olmari” desktop computer. It also works together with Octoprint.

Cura is known to be ok. Slic3r is also in use and Skeinforge has been used. The ease of use goes in the same order. When using any slicer note the needed calibration on z axis. In Cura it is done with start.gcode where the head is run to Z5 and then next line tells printer that it is now at Z(something else). In Slic3r there is z-adjustment in the settings.

Do not put any adhesives or other chemicals (pvac, hairspray, abs-juice) on the white PrintBite printbed. If cleaning is required use acetone, IPA or window cleaner to the bed. The first layer is the most critical. If it sticks the print will most probably stay fixed on the bed for the rest of the print.